There is now a growing consensus that victims must be at the heart of any transitional justice process. Since 2015 and the government’s promise to introduce transitional justice mechanisms in Sri Lanka, these terms have been used by varied stakeholders. The Centre for Policy Alternatives (CPA) has consistently called for a victim-centered approach in Sri Lanka and is not alone in this regard. The tenets of such an approach, however, require further elaboration. International instruments provide guidance as to the legal framework, but the nature of victimhood and its practical implications are subject to contestation and vary from context to context.

The present report seeks to provide some clarification within the Sri Lankan context, exploring both the genealogy of victim-centered transitional justice and models for implementation. CPA believes this to be an important conversation in the context of the government’s promises to introduce new mechanisms and initiatives to address past abuses.

The political transition of January 2015 promised ambitious reforms and raised expectations accordingly. Two years on, serious concerns have emerged with regard to the National Unity Government’s reform project.  Despite some successes, the current public perception is of a slow pace or even stagnation. This in turn has resulted in disillusionment and disappointment, with questions posed about the ability of the National Unity Government to govern effectively. These sentiments are justified in terms of promises made and the inability or unwillingness to manage expectations via a comprehensive communication strategy.

On the eve of celebrating Sri Lanka’s 69th Independence Day, the Centre for Policy Alternatives (CPA) launches a report exploring the pledges made in the areas of constitutional reform, governance and Transitional Justice and examines the progress made, challenges and setbacks. The areas reviewed are those in which proposed reform, if implemented in full, will significantly impact the identity of Sri Lanka and Sri Lankans, the structure of the state, form of government and governance, reconciliation and the culture of impunity.

Sinhala and Tamil versions will be available soon. Despite the commitments and statements on transitional justice in Sri Lanka, there continues to be a limited understanding among the different stakeholders as to what transitional justice and associated concepts mean. This is compounded by the challenge of selecting the appropriate words and terms in Sinhala and Tamil languages which are best suited to and easily understood in the local context. With the evolving discussions and debates on the subject, language could well be the catalyst for the acceptance of transitional justice among Sri Lankans, across Sri Lanka.

The Centre for Policy Alternatives (CPA) made submissions to the Consultation Task Force on Reconciliation Mechanisms, highlighting key areas that require attention in terms of a transitional justice process and the need for reform. The document submitted to the Task Force can be found here, along with this short note on the Office of Missing Persons and this submission to the fundamental rights subcommittee.

Recent reports highlighted instances of sexual violence during the war in Sri Lanka and post war period. Despite promises of change with the election of the Sirisena administration in January 2015, the government has done little to end impunity for acts of rape and sexual violence. The United Nations Human Rights Council (UNHRC) consensus Resolution, “Promoting Reconciliation, Accountability and Human Rights in Sri Lanka’”, adopted in 2015, urges action on rape and sexual violence including the establishment of mechanisms and investigations. In fulfilling its commitments, Sri Lanka must ensure that victims of sexual violence are part of the transitional justice process including having access to accountability and provided with reparations. The latest paper by the Centre for Policy Alternatives (CPA) discusses these issues in greater detail.

In 2015, the United Nations Human Rights Council adopted the consensus Resolution tilted ‘Promoting Reconciliation, Accountability and Human Rights in Sri Lanka’ which provided a framework for transitional justice in Sri Lanka, including the establishment of four specific mechanisms. The Office on Missing Persons (OMP) is to be the first. The Government of Sri Lanka introduced a bill to establish the OMP on the 22nd of May and the bill was gazetted on the 27th of May 2016.  The bill is now before Parliament and it is essential that the legislature strengthen the mandate of the OMP in keeping with the demands for truth and justice by victims across Sri Lanka. Subsequent to enactment, it is crucial that full implementation takes place without any delays and that independent and experienced individuals are appointed and the necessary resources and assistance provided for its effective functioning.

This short guide is the latest by the Centre for Policy Alternatives (CPA) to raise awareness on the OMP’s mandate as set out in the draft bill and related issues. The bill can be changed by Parliament during the committee stage debate and CPA hopes that this guide will help those who want to engage with that process. Once the bill becomes law CPA hopes to update this guide in order to ensure that stakeholders are aware of the OMP and able to engage with it in the pursuit of truth, justice, reparations, and non-recurrence.

Download the document in English here, in Sinhala here and in Tamil here. Land is a key issue for reconciliation in Sri Lanka. Reparations including the restitution of land, if implemented in the correct manner, can contribute to long-term peace building efforts and prevent further marginalisation of people who were affected by the war. With promises by the government of Sri Lanka (GOSL) to initiate reforms including with transitional justice processes and mechanisms, the Centre for Policy Alternatives (CPA) examines a key issue that is crucial for reparations and reconciliation in Sri Lanka: occupation of land in the Northern Province. While recognising a comprehensive study of this issue in Sri Lanka is needed, the present study examines the situation of land occupation in the Northern Province and comments on steps required if the GOSL is genuine in its commitments. CPA hopes that this initial study limited to the North, can be expanded to other parts of Sri Lanka, data gathered from such an exercise potentially feeding into reform processes and informing policy options. 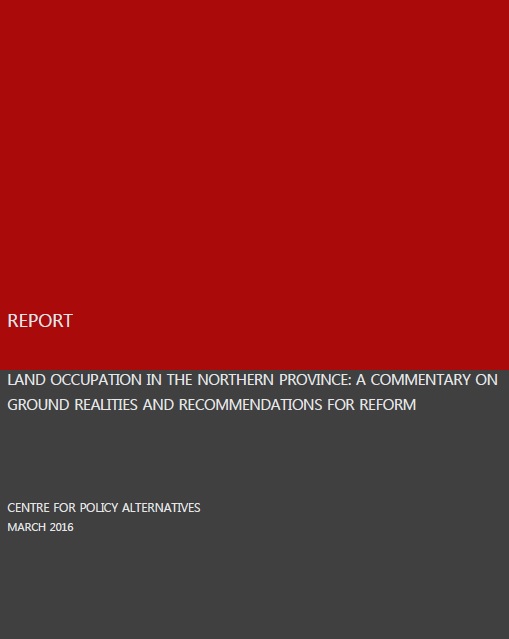 Memorialisation is an important tool in addressing conflict situations where years of repression, social inequality and injustice have created polarised communities. Memory initiatives can be a great healer and an enabler of reconciliation, paving ways and opportunities for dialogue, understanding, apologising, acknowledging and addressing past violence between divided societies. The change in the political environment in 2015 brought with it a space for such reconciliatory action, and in this respect, the government made promises to establish mechanisms to deal with the past- specifically the 30-year ethnic conflict that ended in 2009.

Memorialisation can play a critical role in the government’s transitional justice agenda, specifically in terms of complementary measures that can help reinforce these systems that may take many months to set up. Further, memory initiatives can address grievances that are not captured fully by the structures promised by the government, while bringing together communities who have suffered similar issues such as disappearances, which were common not only during the 30-year conflict, but also during the two Southern insurrections.

This discussion paper is one in a series of policy papers related to transitional justice that the CPA hopes will facilitate discussion around incorporating international best practices in the government’s approach to dealing with the past. 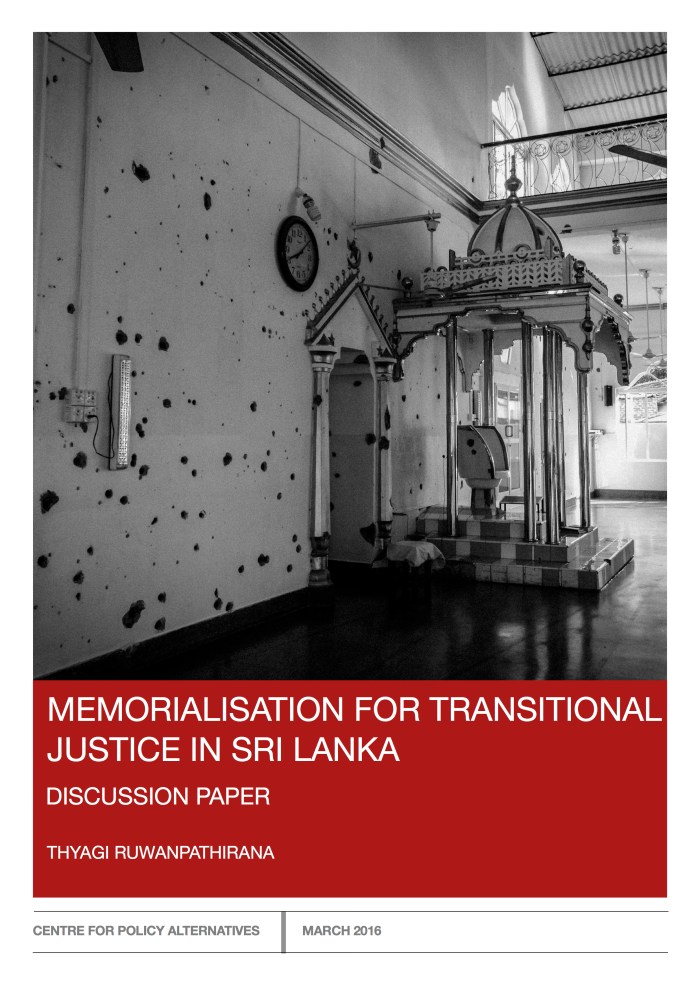 The 2015 political transition in Sri Lanka witnessed several promises for reform. One area in the reform agenda includes the processes and mechanisms for transitional justice.

The resolution titled ‘Promoting Reconciliation, Accountability and Human Rights in Sri Lanka’ adopted at the United Nations Human Rights Council in 2015 provides with it a broad framework for consideration. One area of consideration and debate is on the design of mechanisms including the participation of internationals in domestic mechanisms.

The latest paper by the Centre for Policy Alternatives (CPA) examines this issue through three dimensions: the legal, political and practical and makes the case why it is possible and necessary to have robust international involvement in truth and justice mechanisms. The paper examines the main legal arguments invoking constitutional provisions to oppose the inclusion of foreign judges and lawyers in a judicial process and concludes that there is presently no constitutional bar for such inclusion. It further examines past initiatives, which had some international involvement and highlights the reasons for their failure. It argues that a new framework that goes beyond the past practices must be introduced, with internationals working in partnership with locals to investigate and prosecute international crimes and develop the expertise within Sri Lanka. With the end of the war in 2009, the need to address the widespread death, destruction, and displacement was overwhelming. Allegations against all sides of potential war crimes and crimes against humanity demands an independent investigation and the prosecution within a credible court of law of those responsible for international crimes committed during the final stages of the war and during its aftermath. The Centre for Policy Alternatives (CPA) has consistently called for such independent investigations and other accountability measures to address truth, justice, reparations and non-recurrence of violence in Sri Lanka. This appeal continues six years after the end of the war. In this report, CPA sets out a range of processes and mechanisms available to the Sri Lankan government to ensure accountability for serious human rights violations and alleged crimes committed during the war. While many stakeholders are identified in the report, the ultimate responsibility for truth and justice in Sri Lanka lies with its citizens; accordingly they must play the central role in the design and implementation of future processes and mechanisms. CPA hopes that the options provided in this report enrich the discussions and debates about the design and implementation of a credible domestic process with the long term goal of achieving truth and justice in Sri Lanka.